AAR EDITION INTERNATIONAL
The Future of the Orchestra 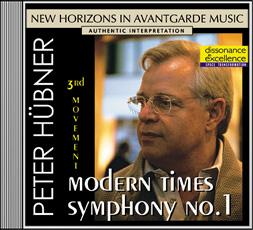 JOURNALIST: How do you see the future of the orchestra?

PETER HÜBNER: In my opinion, there is no future in new music for the symphony orchestra. It will disappear, just like the dinosaurs disappeared.
With modern digital technology a new kind of technology has developed which offers totally different possibilities than the conventional orchestra.

You mustn’t forget: more than 90% of what is broadcasted today under the name of music, has not seen a conventional musician.

At present, this still more or less concerns pop and light music – but it is only a question of time, and these developments will spill over to classical music, and there they will bring out remarkable performances of interpretation which will put everything that we know today, as a conventional orchestra’s interpretation of classical music, in the shade.

But here, too, this benefit of artistic performance will probably only play a secondary role in abolishing the symphony orchestra, because, as I have mentioned beforehand, taking part in a conventional orchestra is extremely hazardous to one’s health.

On the one hand, the musician’s ear is damaged with the noise of the orchestra, which exceeds the medically permissible level by far – with 135 decibel by 32fold.

On the other hand, playing in an orchestra demands enormous concentration from the individual musician, because during the performance of harmonious music – which applies to all classical music – a single wrong tone played by a single musician will immediately be heard by everybody.

The musician cannot stand this pressure for long. The system of today’s orchestra involves that a coductor’s mistakes are not perceived at all by the audience.
But nevertheless, he has managed to rise to this position where he monitors the situation that no musician is allowed to make a mistake. And if it so happens that a musician frequently plays a false tone, he might as well look for an other job. In this respect, the musician in an orchestra is under constant pressure.

He has a family, he has children to take care of, he also has his personal worries and hardships just like anybody else, but he must do a perfect job. In the long run, he is bound to fail.

The realisation of this system of conventional orchestra organisation, and the perverse performance situation which simply ignores human inadequacies, drives the musician step by step to frustration, and together with the increasing strain of aging, many of them turn to alcohol, stimulants or become addicted to pills.

In the end, all this will make him ill. This applies especially to the women in an orchestra, who, on the whole are even more sensitive than their male colleagues already are, and who are therefore even more susceptible to the stress and strain.

We mustn’t forget: the system of the orchestra is a relic from the times of dictatorship. For this reason, the question of a musician’s freedom, his well-being, his health and of his being overtaxed, his mental strain and frustration was historically not taken into consideration at all.

He had to function like a soldier. Today, this is different. In our democratic world of today we must indeed take care of the soldier’s health, and the same will have to be done for the musician in an orchestra.

But with the question of the musician’s health and its medical answer at the latest, the conventional symphony orchestra will come to an end – at least in the way it is functioning today.

That, however, does not necessarily mean the end of the musician.
Here, an enormous area of digital opportunities are available to him, and if he has enough love of music in him, and is open-minded, he will learn to use these means, and he will come up with interpretations that will completely astonish the listener.