PETER HÜBNER: Atonal music, 12-tone music, serial music, the music of the so-called avant-garde does not touch this aspect of the harmonical, indeed many of them even avoid natural harmony by all means.

The whole theory of serial compositional technique can do completely without the aspect of the harmonical – that, however, does not make it less interesting, only with that its public failure is pre-programmed, as medical science has proven: biological systems are harmonically structured by nature, their functions are harmonically arranged, they recognise dissonant structures as foreign to their nature, and therefore spontaneously reject them.

Years or decades of educational process, carried out by the avant-garde and their helpers on a large-scale through the media, concerts and music academies, and which they are still carrying out in an overbearing manner, are of no help here either.
Due to the disregard of the natural order of biological systems, this whole desire is doomed to fail as a kind of medical disturbance of order.

However, the philosophical and music-theoretical thoughts which belong to the concepts of modern disharmonious music, should not be diminished by this statement, and the artistic ability of their creators shouldn’t be either. But even an intelligent car will not be used spontaneously by the public, as long as it’s not guaranteed to drive safely.
Avant Garde Music                                              continued 8 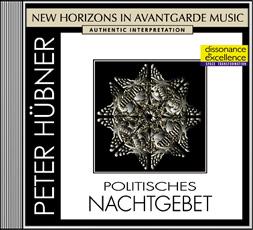 JOURNALIST: I would like to return to the following question: is it easy to make harmonical music?

PETER HÜBNER: This question can be explained in the same way as the question about the ease with which a healthy baby is procreated, because it concerns naturally structured music. The fertile person is able to father a child, the infertile man is unable, the man who has restricted fertility will father a disabled child. This is a simple truth, and it also applies in music, as far as harmonically structured music is concerned – i.e. perfectly harmonical music, natural music.

This craft cannot be learned from outside, just as one cannot learn fertile strength from outside. One has it or one hasn’t, or one has it only to a limited extent. And our history of music supplies loads of examples which confirm these facts.

When I see, how someone drives a car like a madman all over a field, then I don’t quite know if he is able to drive in an orderly manner through the streets. This may be the case- but it may also not be. And that’s the way it his here. One or the other of the composers among the circles of the avant-garde can possibly make harmonious music as well as he can make disharmonious music. I am an example for this. But it is equally conceivable that some of them or even all of them cannot make harmonious music, as this is only possible if it comes out spontaneously from the inside. And nobody except me has furnished proof of this.

Without doubt they can – approaching the matter from the outside – compose music which, at first glance, seems to be harmonious, for this is also part of conventional compositional studies. But that sort of music that has been designed from outside with an image of the harmonious, is not successful with the public – as that which the simple creator of a “Schuhplattler”, the typical folk dance of Tirol, Bavaria and Carinthia still has.

In this respect, it is easy to understand whether it is easy or difficult to make harmonical music. As said beforehand, it is the same as with procreation. The infertile man cannot father a child despite decades of enormous efforts and different techniques, and the fertile man can father lots of children without any effort whatsoever, and without any complicated academic studies – it’s as simple as that. This is also the absolute answer to the question of being able to decide to create harmonical music.