The Future of the
Classical Symphony

JOURNALIST: Herr Hübner, from your books I take it, that you also support entirely new views in the field of symphonic music. What can you tell us about that? 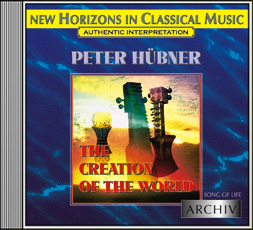 PETER HÜBNER: Following “Song of life”, I began with my symphonic work, and in this respect, I have also continued the personal ethical interests of the great classical tone creators. A symphony belongs to so-called “absolute music”.

Contrary to the ideas of a large number of experts, the work of our great classical tone creators – as far as it belongs to the area of absolute music – is by no means music detached from human evolution, which is perhaps even played for its own sake, but this is an ideal language to

describe and/or present the field of life of inner human powers based on emotion and mind.

Therefore, this music belongs by nature to the field of philosophy or the art of life – where it then also links with religious music.

This kind of absolute music, which has human dignity as its sole theme, finds its best expression in a symphony, and here, in particular, with Haydn, Mozart and Beethoven, who, as is well-known, were not mainly committed to music but to truth, and they regarded music as the best means known to them to express truth on an emotional and intellectual level.

And these two main human powers, emotion and mind, are the pillars of symphonic creation of our great tone creators for their musical evolution of natural human dignity.

Whilst universities, schools and official educational institutions are devoted to teaching outer skills, the great classical tone creators regarded it as their holy duty to educate man in the use of his inner skills – to introduce to him his inner human skills as such, to teach him to differentiate between his inner human powers, and to train him to use his inner skills in a balanced and successful way.

JOURNALIST: You are working on a cycle of several symphonies, the first of which is the “SunSymphony”. Which other symphonies are part of this cycle?

PETER HÜBNER: Altogether, there will be nine symphonies: the “SunSymphony”, the “MoonSymphony”, and the “StarSymphony”, as well as the five symphonies of the earth, water, fire, air and space. These eight symphonies find their common basis in the ninth symphony, the “Symphony of Life”.

In these nine symphonies I want to show the complex play of the inner and outer natural powers in human life according to the rules of the classical symphony, and at the same time, open new doors for the musical craft.

In this cycle, I try to show the field of inner-human development, according to the rules of the classical symphony. In this respect: Nothing fundamentally new!

JOURNALIST: Herr Hübner, you consciously hold your musical work in the tradition of the great classical composers.

But as you very often also employ electronic means to realise your work, even experts keep asking, why you, in particular, who is so committed to nature, very frequently use electronic means, and not exclusively and logically “natural” instruments?

PETER HÜBNER: If a composition has matured in me, then I hear it inside, sounding full of life.

Nowadays, many so-called fans of classical music say that music can only be called classical, when it is performed with the instruments of a classical orchestra.

This only shows that these musical experts have no insight into the process of the natural creation of music.

Nature creates a classical composition in a tone creator, not as a song of praise to instruments – natural music creation is not an acoustic end in itself: when a natural composition is created in the mind, i.e. when nature brings out a piece of music in the composer’s creative imagination, then it does so to stimulate the natural evolution of his diverse inner powers of life.